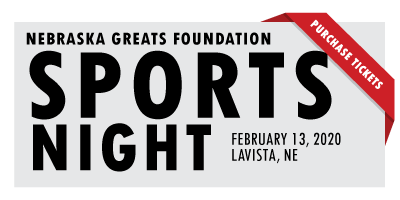 What is the Nebraska Greats Foundation?
The Nebraska Greats Foundation (501C-3 nonprofit) provides financial assistance to any athlete who lettered in a varsity sport at any of the 15 four-year Nebraska-based colleges and universities. Qualified recipients must prove a medical and financial need. All applications are reviewed by licensed medical professionals and approved by the Board of Directors.

Support is available for any collegiate athlete who lettered in any sport from the following Nebraska institutions:

Donate Today
“You never think you’re going to be that person in the middle of a story that says you need help. But what an honor and relief for me and my family to have the teammates I have and the support of the Nebraska Greats Foundation.”
- David Humm, All-American Quarterback
University of Nebraska Lincoln, 1972-74
How we help
It’s simple. We put our money where our heart is, paying for medical services and goods (prescriptions, equipment, etc.) needed by our recipients. By easing the financial burden of medical care, former athletes can focus on healing their bodies, minds and lives.

Support
We help pay for medical expenses after former athletes have exhausted their own resources.

Care
We assist athletes in finding solutions to both immediate and long-term needs.

Learn More
A medical problem that may have at first seemed like just another opponent to defeat, another test of one’s resolve, instead turns into a mountain of bills that can’t be overcome by just ‘going out there and giving it 110%.’ That’s where we come in.
- Jerry Murtaugh, Championship-Winning All-American Linebacker
University of Nebraska Lincoln, 1967 - 1971